Ky'sha Johnson from the Cass County COA and Jonathan Wuepper, the Local History Branch Manager of the Cass District Library, recently put together walking tour of some of the historic buildings in Downtown Cassopolis. 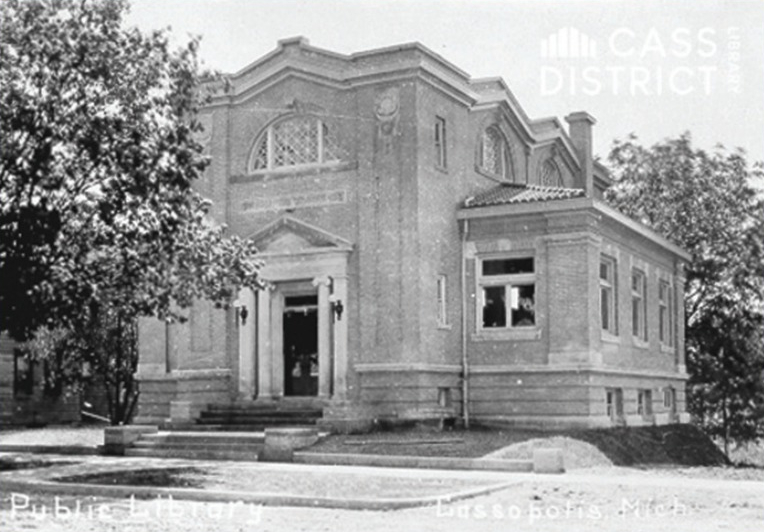 The building cost $10,000, the money being a gift from Andrew Carnegie. Architects were Young and Shambleau of South Bend. The building contract was let to Rosewarne of Mishawaka.

Construction occurred during the late fall and winter of 1908 through the spring of 1909. The building unofficially opened on May 28, 1909, the official grand opening occurring on August 7, 1909. This building housed the LaGrange Township library from 1909-1993, and the Cass County Library from the 1950s until 1978.

In 1994 the building opened as Local History Branch of the Cass District Library, serving as a research library for genealogy and local history. 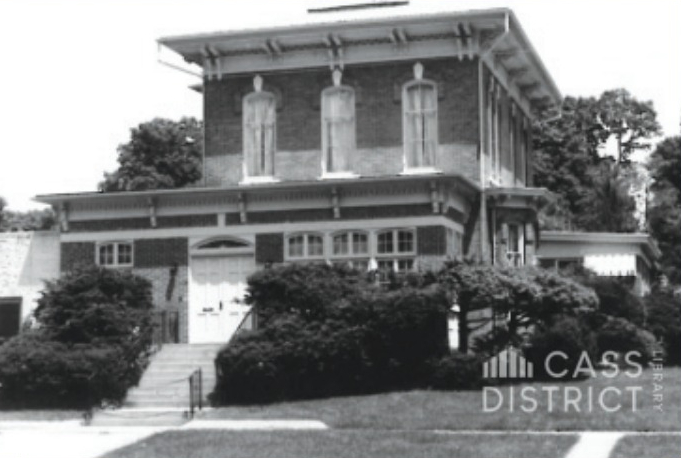 Originally home of Dr. Leander D. Tompkins & family. The home likely contained his offices. This building was built during the 1870s, and replaced an earlier frame home that was on the same site.

Dr. Tompkins came to Cassopolis in 1848, and with exception of attending medical school and serving in the Civil War, lived here until his death in 1902.

After Dr. Tompkins’ death, Mrs. Tompkins sold the home to the Connolly family which used it as a funeral home. It changed hands to the Wagner family in 2012.

No Longer exists - Originally stood at the northeast corner of Broadway & State Streets, 1841-1898 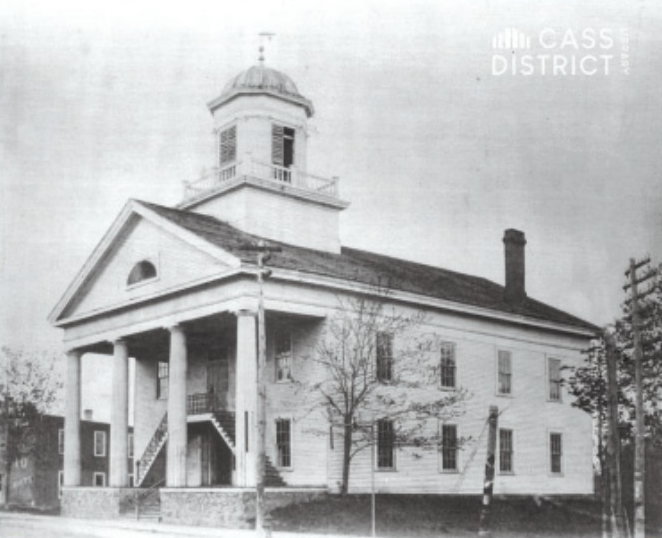 This was a Greek-Revival style building, serving as Cass County courthouse until 1898. It was then moved to the south side of State Street across approximately from where Bass Park is now located.

During its time on State Street, the building served as the Colonial Opera House, and later the Colonial Movie Theater. It was torn down in 1968. 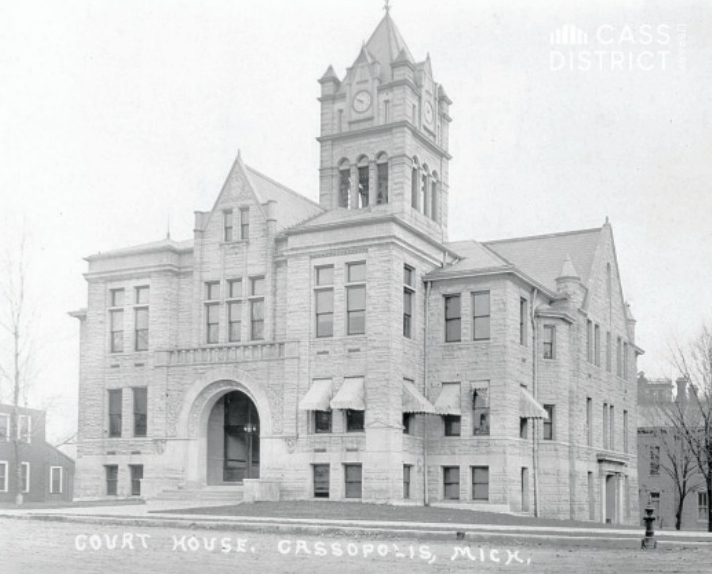 Ground was broken for this structure in late July 1898. The cornerstone was put in place in October of that year. Architects were Bowman & Rush of Grand Rapids, and contractors were Biggerstaff & Atkins of Kalamazoo. The stones came from the Bedford  Quarry Company in southern Indiana. Construction lasted throughout 1898-1899, and final touches on the building were completed until 1900, after the building was in use. 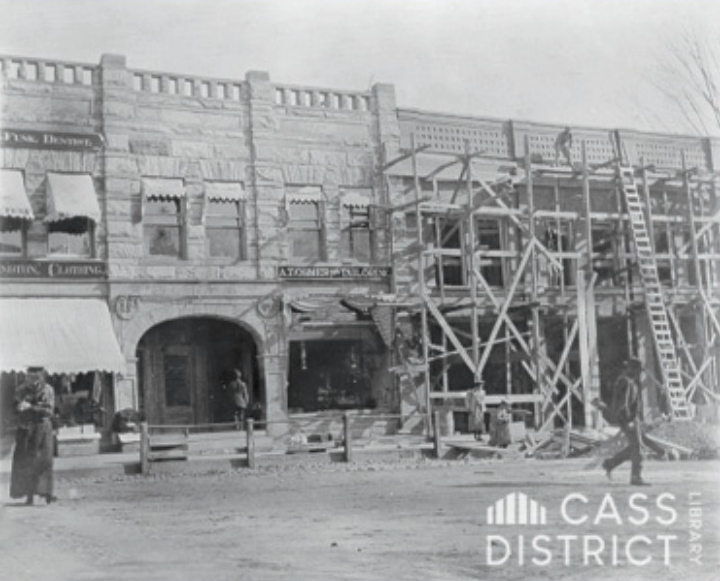 Two story red brick. Built in the 1890s and housed the US Post Office for Cassopolis, which occupied the building until 1957 when it moved to its present location on South Rowland. 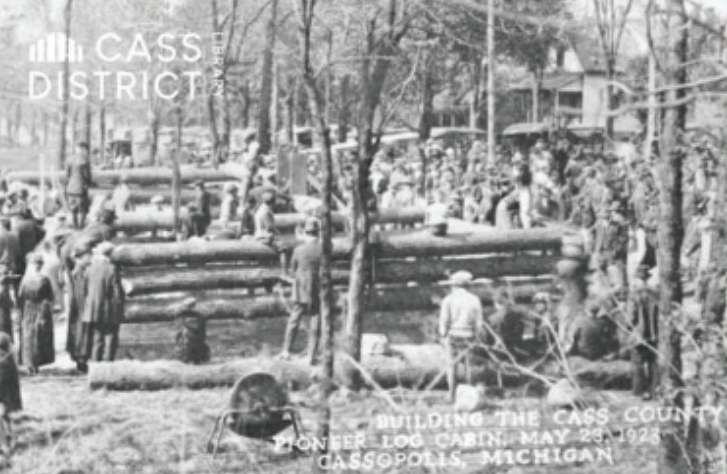 Constructed from logs donated by Cass County pioneer families, or their direct descendants, and cut from woodlots representing township in the county. The stone fireplace and stick chimney was built by Ab Ackerman, who was a well-known mason of Lagrange Township.

Construction of the cabin began on May 23, 1923 amid much pomp and circumstance including music from the Cassopolis Military Band. Speeches were given by Charles O. Harmon, Secretary of the Cass County Pioneer Society; Asa K. Hayden, Cassopolis Village President; and Julia Ann Tietsort, the first child born in the village in 1830.

The purpose of the pioneer log cabin is to house the artifacts of the Cass County Pioneer Society and to serve as a reminder of the hard way of life that our pioneers lived during the early years of the county. 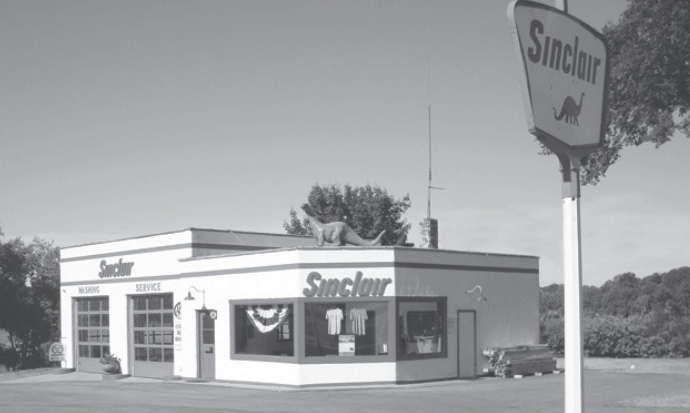 A filling station was first built on this site as early as the 1920s. The current building was not constructed until the 1940s or 1950s by the Gafill D-X Oil Company, which operated a filling station and repair auto shop here until approximately the 1960s. 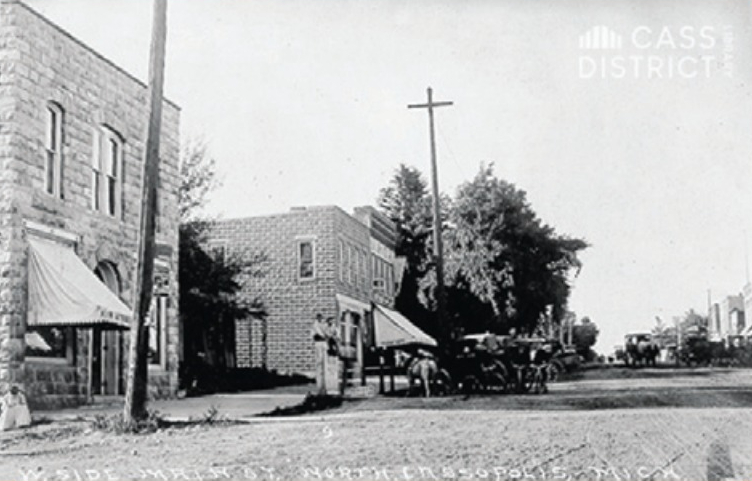 During the 1950s the building served as a real estate broker office. More recently (1990s-2020s), it housed an artist studio and blacksmith shop. 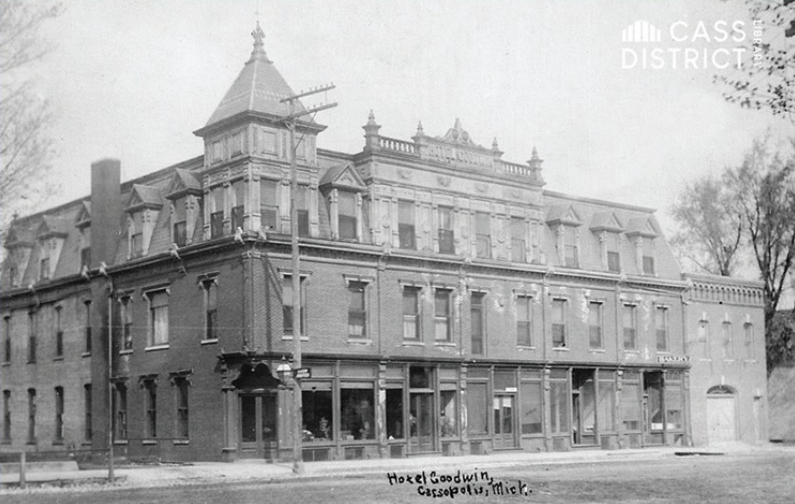 This hotel was three stories tall and built in the Second Empire architectural style. Built by Dr. Fairfield Goodwin probably in 1896-1897, replacing the original Goodwin Hotel building built 1887 (130 South Broadway). The original 1887 hotel, still standing, is
located in the middle of the west block of buildings on the west side of Broadway. The lower part of the 1887 building is currently occupied by Helping Hands.

The 1890s Goodwin Hotel was perhaps the most recognized landmark within the village of Cassopolis, aside from the Courthouse, for approximately 70 years. It was used as a hotel until 1951, after which it was used for retail and various other businesses but the building soon fell into disrepair and was torn down sometime in the late 1950s or early 1960s.

A parking lot is present, in front of Cassopolis Auto Supply, where the hotel stood. 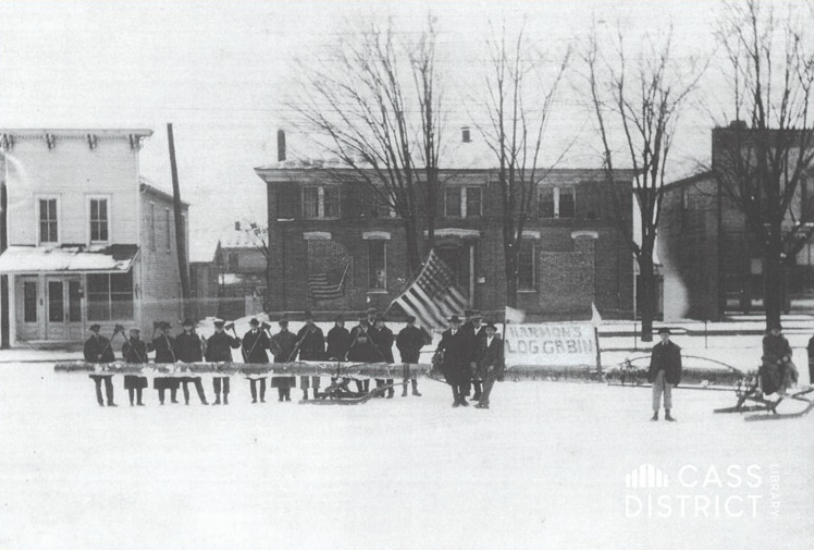 The Cass County records building was constructed in 1860 by Major Joseph Smith of Cassopolis. It was designed to be a “fireproof building” and its nickname during its early years was “the fort” because it was difficult to burglarize. Top 20 Dad Jokes
Throughout the years, your precious pops has taught you (almost) everything you know—including (take it or leave it) how to tell terrible jokes. We can all admit that you truly need a demented sense... (read more)